With the increasing, late marriage and late childbirth in China, as well as the two-child policy, and even the looming phenomenon of the third child in some regions, the group of elderly pregnant women has begun to approach the public’s vision. A variety of problems derived from it also appear egg quality decline, organ function cannot meet the conditions of pregnancy, mental anxiety, and so on, all of which form a huge obstacle for elderly women to seek a child.

One of the most recent studies of nicotinamide mononucleotide (NMN) is on the development of female oocytes and early embryos, and the female oocytes are also on senile oocytes, which are similar to “old age” eggs.

High-quality oocytes, a prerequisite for successful fertilization and subsequent embryonic development, are the material basis for the onset of life. In most mammals, female reproductive aging is particularly defined by a prominent decline in the quantity and quality of follicles and oocytes.

It has been shown that the fecundity of women begins to drop in the early 30s and declines more rapidly after the age of 35, accompanied by a dramatically increased incidence of infertility, miscarriage, embryo lethality, and congenital birth defects. The significant decrease of NAD+ levels in various tissues and cells is the most important factor leading to a series of age-related diseases.

As a precursor of NAD+, NMN has a great application prospect.

According to a study by the College of Animal Science and Technology at Nanjing Agricultural University, in vivo supplementation of NMN restored the NAD+ levels in maternally aged oocytes, enhancing their maturation rate, fertilization ability, and subsequent embryonic development potential. 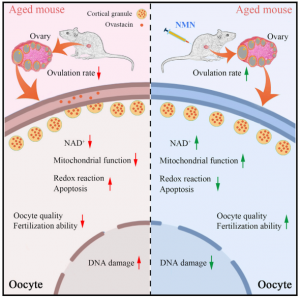 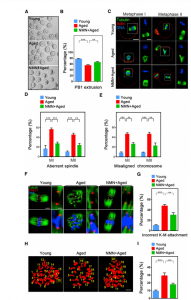 Thus, the quantity and quality of aged oocytes can be improved, which provides a solid theoretical basis for the application of NMN in improving the fertility of aged females. Although it has only been developed into animal trials, it is believed that NMN will soon go into clinical trials and eventually bring good news to the elderly people who are preparing to have children in the form of dietary supplements or drugs based on its factual basis in the field of anti-aging.