What are the changes NMN can visibly make on you?

Since the nicotinamide mononucleotide (NMN) was found to promote the increase of NAD+ in the body, the scientific research on its anti-aging effect in an endless stream of studies, and some even dubbed it a “longevity drug”.

However, whether NMN promotes NAD+ in the body, or repairs DNA and inhibits aging signs in related organs, both can be understood as changes silently occurring in the body. However, for consumers taking NMN-related health care products, changes in the body are often difficult to be perceived. Only when there is an obvious promotion effect on the outside, it is possible to take the products for a long time, as well as the spontaneous recommendation of public praise.

From December 16th to December 18th, in the CPHI exhibition that EFFEPHARM was invited to participate in, the professional team of EFFEPHARM was asked the most questions in the face of many visiting customers: what is the use of NMN and what kind of performance can it have in the outside?

Therefore, on the basis of integrating existing scientific research and existing consumer feedback, EFFEPHARM summarizes the following content to bring some relatively professional exposition to those who care about this topic.

According to the existing academic articles, the two most likely changes after taking NMN-related products are:

2. skin quality you get back up and hair

1 The improvement of sleep quality

Back in 2006, scholars Nakahata & Bessho proposed that a regular sleep schedule is essential for a healthy aging process. Disordered sleep patterns not only accelerate aging but also disrupt all the cellular and genetic imbalances involved in daytime sleep and sleep, leading to the onset of disease. 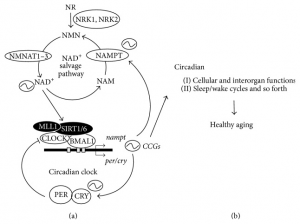 As shown here, NAD+(nicotinamide adenine dinucleotide) is an important component of this pattern, maintaining the continuous and healthy development of the entire life form. In an in vivo study, Nakahata & Bessho found that older mice had much fewer NAD+ in their cells and slept less well than adult mice. And with fewer NAD+, there is less energy available for day work and night sleep, and the risk of age-related internal organ problems rises sharply.

Therefore, when the relevant NMN is ingested in our body, which promotes the increase of NAD+ substances, we have more substances in our body that can be used for the law of day cultivation and night rest and can provide more energy for our life activities.

Many consumers have reported that after taking NMN-related health care products, their sleep quality has been significantly improved, especially the symptoms of insomnia have been improved, the reason is as described above.

2 skin quality you get back up and hair

Niacinamide is a very big component of beauty cosmetics and skincare products, and its whitening and repair effect is almost mentioned in the product publicity of major brands. As a precursor of NAD+, whether NMN, which has a large number of anti-aging studies, can have targeted effects on aging skin problems outside the skin, is also the focus of researchers in the past two years.

An in vivo study by Dr. Keshav Singh and his colleagues at the University of Alabama at Birmingham showed that mice developed wrinkled skin and widespread visible hair loss within weeks when their mitochondria declined or when they developed mutational problems with dysfunction. When the mice’s mitochondria returned to normal, their skin quickly became smooth and hairy, almost indistinguishable from those of healthy mice of the same age. 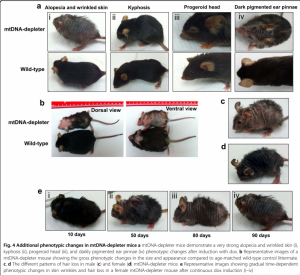 So there’s a problem here. What are mitochondria? Why would a mitochondrial boost make such a big difference to a mouse’s appearance?

From a biological point of view, the function of mitochondria is mainly to provide kinetic energy to the cell, even in the industry is known as the “miracle of life evolution”.

A mitochondrion is a kind of organelle in a cell, roughly like a short stick; They take in oxygen and “fuel” from the surrounding cell fluid and let them “burn” inside, using the chemical energy to power all the energy-demanding activities in the cell-like an engine.

The higher the composition of mitochondria in a body cell, the more kinetic energy it produces, the better the cell functions, and the better the state it responds to our external physical signs. And what we call wrinkles, and hair loss, are important signs that the organs involved are getting older.

In 2019, Professor Kane A E et al. from the Department of Genetics of Harvard Medical School found that as an important precursor of NAD+ synthesis in vivo, NMN enhances the level of NAD+ in cells and plays many beneficial roles, such as improving metabolism and protecting the cardiovascular system, etc., through activation of Sirtuins. The Sirtuins that Professor Kane is studying are one of those amazing mitochondria we’ve been talking about for so long.

So promoting mitochondrial activation of more Sirtuins by ingesting NMN, in our own skin, is also expected to have a miraculous effect.

But at the same time, it should also be noted that the relevant laws and regulations on the classification of NMN in cosmetics are not very perfect at present, and the effect of NMN ingredients on external application also needs more scientific research and exploration data.

But a series of studies by Dr. Keshav Singh and his colleagues have led us to believe that in the near future, our skincare and haircare world will have another amazing technology.

Actually, so far, I still want to say, NAD + the most core function is to provide more for our human body energy source for a healthy life, it has been studied by many researchers focus more focused on how to more efficient use of NMN for us to build a more perfect and dynamic society in the future. As for the external appearance of the above elaboration, at the present stage, it should be said that it is more accurate to vary from person to person, rather than blindly pushing its superstition to a “longevity medicine” height.

May all of us, with the progress of science and technology, have more time to enjoy this wonderful big world.

EFFEPHARM will also uphold this original intention, which has been moving forward, for the industry and the people who need us to provide the NMN industry’s best quality raw materials.